With increasing occurrences in unfavorable biotic and abiotic conditions, farmers are facing significant challenges with maintaining successful crop yields. With the development of GSR varieties, farmers across Asia and Africa can tailor their crops to regional-specific conditions and promote crop yields (© Pexels).

Supported by the Chinese government and the Bill & Melinda Gates Foundation, the GSR project has successfully bred 78 varieties of GSR for 18 target countries across Asia and Africa. Since the project launch in 2008, over 6.12 million hectares have been used to grow GSR across the two continents with the hopes of supporting 30 million resource-deprived smallholder farmers.

“GSR varieties are superior rice varieties that can produce high and stable yields under fewer inputs. They require less chemical fertilizers, pesticides and water, and are more tolerant to pests, diseases, drought, salinity changes, submergence and other abiotic or biotic stresses,” said Li Zhikang, one of the leading researchers on the project from the Chinese Academy of Agricultural Sciences.

Target countries include Vietnam, Laos, Cambodia, Sri Lanka, Pakistan, Rwanda, Uganda and Senegal. Notably, a number of autonomous regions of China are also included in the reach of the project, such as Sichuan, Guizhou provinces and Ningzia Hui.

As well as commercially producing the multiple GSR varieties, the research team have developed an effective molecular breeding strategy which has been implemented to reduce the selection period of new varieties from 8-10 years to just 4-6 years. By using this method to produce multiple varieties of GSR, target countries are able to select plants that meet the country-specific agricultural requirements e.g. a drought-prone country or region, for use in an area prone to disease, etc.

A recent study in the Philippines showed that with a greater tolerance for tougher abiotic and biotic conditions, GSR can produce an average yield increase of 0.89-1.83 tonnes per hectare. In turn, this results in 230.9 USD per hectare for a farmer growing GSR crops.

In 2013, the super typhoon Haiyan devastated the central Philippines. The majority of coconuts grown in the area were destroyed, causing significant losses to local farmers. Luckily for many of these local farming communities, GSR seeds had been distributed a few months prior to the natural disaster. GSR was found to be one of the few crops that were able to survive the increased soil salinity due to the flooding.

“I like GSR because its grains are good and considerably heavier that the previous rice grains I tried in the past,” said Montano, one of the first farmers to grow tough variety GSR. “The crop is tolerant to pests and diseases.”

In West Africa, six GSR varieties have been developed with high-yield potentials and strong tolerances to drought, iron toxicity and salinity. Roughly 14.5 metric tonnes of these seeds were distributed to local rice breeders. The project assisted with the training of around 500 African and Asian scientists, technicians and farmers in agricultural fields such as seed production, crop management and breeding. The hope is that this training will help increase countries rice capabilities and promote more sustainable growth in the future.

If you would like to read further on this subject, please see the links below:

Conservation farming has been promoted in sub-Saharan Africa as a way to potentially improve yields while conserving the environment. Farmer livelihoods are increasingly threatened by climate change, declining soil fertility, land degradation, pests, a… 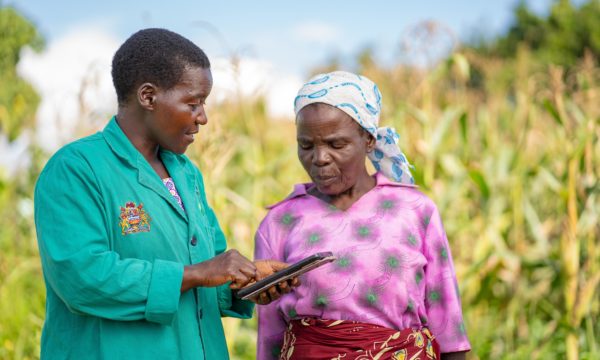