The plant clinic in town of Chamis in the department of Cajamarca represents something unusual in Peru: a farmer advisory service with a permanent presence. According to the agricultural and livestock census of 2012, only 7.3% of the country’s farmers receive technical assistance and in Cajamarca it is even less, just 4.6%.
Faced with this alarming scarcity of services for smallholders in Peru, the introduction of the plant clinics fit like a hand in the glove. The clinics, a new type of rural service, were established in several regions of Peru in 2013 as part of an agreement between the National Institute of Agricultural Innovation (INIA) and CABI’s Plantwise programme.
Chamis lies at 3200 metres above sea level, about 10 km from the city of Cajamarca, in one of the main livestock-rearing areas of the country. The plant clinic is managed by the plant doctors Eng. Marieta Cervantes Peralta and Eng. Fernando Escobal Valencia of the INIA Agricultural Experimental Station of Baños del Inca, in Cajamarca.

The Chamis plant clinic is located on the second floor of the municipal building, just upstairs from the human health clinic.

The plant clinic is located in a small room on the second floor of the municipal building of Chamis, just upstairs from the health clinic for humans. Two large banners placed outside the building announce the clinic. Below, near the entrance to the health clinic, a sign announces a vaccination campaign: “Get vaccinated for the gold”, referring to a slogan used by the Ministry of Health to communicate that children who are vaccinated on time will be strong and healthy and win the “gold (medal) in life”.
Before establishing the clinic, they contacted the mayor. “We told him that we wanted to improve the crops and he offered his help immediately,” Fernando recalls. “Then we wrote a letter of understanding”.
According to the plant doctors, the clinic is well located. The health centre is an attraction and that helps to bring people into the plant clinic. Having a fixed space in the municipal house gives the service a certain status and signals a political commitment. The mayor’s office also supports by helping with the publicity and sometimes by contributing a snack.

More than a plant clinic

The plant clinic is more than its name suggests. It is a “plant and livestock clinic” or, if you prefer, an “agricultural and livestock advisory centre”. The plant doctors receive all kinds of queries from the farmers: for crops, animals and general farm topics. “We always receive livestock and crops in the plant clinic”, Marieta explains. “We receive many queries for problems which are common here for guinea pigs and cattle, for example problems with ectoparasites and flies. We try to respond as best we can.”
At the request of Mr. Eusebio Castrejón Cueva, Deputy Governor of the hamlet of Secsemayo, the plant doctors organized a visit to the area so that other farmers could have the chance of using the clinic’s services. Secsemayo is 30 minutes by pick-up truck from Chamis and it is too far for many people from there to travel to the clinic.
On the day of the visit, Fernando and Marieta worked with 20 farmers, showing them how to use baculovirus (a biological insecticide) to control the potato tuber moth in storage. After finishing this task, the farmers said they were worried about the flies that attacked the horns of their cattle. Everyone went to the pasture to verify the problem, and sure enough, they saw that abundant flies were attacking the whole body of the animals, especially the horns. With such an attack the cows could not eat in peace, rather they seemed nervous and were losing weight.
With the support of the College of Veterinarians and in coordination with the authorities of Secsemayo, they organised a follow-up visit to the area, where they treated 70 head of cattle (35 farmers), with a mix of 6% Cypermethrin, 2% de carbaryl and 7% piperinyl butoxide. 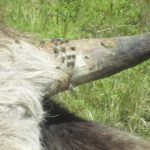 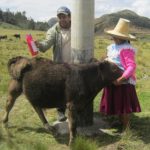 
Two weeks later, the farmers reported that the treatment had been 100% effective. In the words of don Eusebio Castrejón Cueva: “With that treatment we don’t know where those flies have gone. Our animals are healthy, thanks to you people”.

The alliances are a way of better using the expertise that exists. To make the best use of its scarce time and resources, INIA also looks for ways of generating synergy between the different extension activities that it carries out, for example the clinics, the plant health rallies, the demonstration plots and the visits to individual farmers. For the plant doctors, these are complementary methods and they use them in an integrated and dynamic way to optimize their available resources.
Fernando has no doubt that many farmers see the combined clinics as a help to win the “gold medal of life”. “If the clinics were closed today, they would look for us in Baños del Inca, in the city,” he says with conviction.
Contributed by Sol Danielsen. Photos by Fernando Escobal Valencia, José Gómez y Sol Danielsen.

Plantwise in Peru is coordinated by INIA, Ministry of Agriculture and Irrigation (MINAGRI), and implemented through 8 of the 19 experimental stations of INIA.