I meet Man Bahadur Chhetri and his assistant on a bright Sunday morning as they are setting up the e-plant clinic in Gorkana, on the outskirts of Kathmandu. On the drive over, I saw plenty of maize being grown on smallholder plots and, here and there, tomatoes in polytunnels. Around the corner from the clinic, a woman is sorting potatoes on the floor of a dark storage room on the ground floor of her house. Nepal’s economy is predominantly agricultural and even a mere 10km from the centre of Kathmandu, I can tell it is a major part of people’s lives.
Man Bahadur has been with Plantwise since the programme launched in Nepal in 2009 and has been responsible for this clinic for about three years. However, e-plant clinics – plant clinics equipped with tablet computers – are a relative novelty in Nepal. Funded by the UK Government through the Centre for Applied Crop Science (CACS), the tablets were only rolled out to plant clinics in 45 of Nepal’s districts in March this year.

Man Bahadur was among the first intake of plant doctors trained in the use of tablets. “Data entry is much quicker overall now. We used to write out each prescription sheet in Nepali, and then had to translate them all into English back at the office. With the app, everything except the recommendation is automatically in English and we only have to translate that before we submit it.”
Over a cup of sweet tea bought from the farmers’ cooperative behind the clinic, I ask him how many farmers he is expecting to serve today. “Ten, maybe twelve. The clinic runs from 11am until about 1pm or 2pm.” In the winter months when there’s little to do in the field, it can be far fewer. “I’m expecting them to bring tomato, pumpkin, maize. We’ve had an unseasonable amount of rainfall and storms recently – there’s a lot of moisture”.
Sure enough, the first farmer, an elderly gentleman called Ram Tamarg, appears carrying a sorry-looking tomato plant. With the help of the Plantwise Factsheet Library app, it is quickly diagnosed as affected by late blight. “Farmers like Ram here tend to put off covering their tomato plants in a polytunnel due to the recent storms, which can blow the plastic sheets off. The rainfall leads to excessive moisture which leads to blight.”
Man Bahadur types up Ram’s contact details and information about his farm, the crop and the diagnosis in the data collection app on the tablet. The recommendation is entered in Nepali, and is then sent to the farmer by SMS. There is a minor hurdle: Ram has left his mobile phone at home and cannot remember the number. But for every technical hiccup there is a technical solution. Ram asks if he can provide the farmers’ coop number, and they will forward the SMS to his phone. There is nothing to stop Ram sharing the SMS with his neighbours if they have the same problem. Thanks to e-plant clinics, Plantwise’s plant health information can now reach even more farmers at the touch of a button. 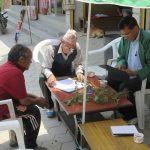 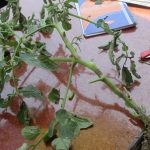 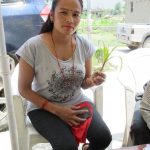 
Ram is in a hurry to get back to his farm. “There’s an election coming up, and many farmers are politically active,” explains Man Bahadur, “they don’t have time to stay long and are always eager to leave.” Ram has barely left when a second farmer, Shusma Basnet walks up the dusty road with a young maize stalk that is badly chewed. As Man Bahadur attends to Shusma, more and more farmers arrive on foot, by bike and on mopeds. Soon Man Bahadur is holding court surrounded by nine or ten famers – and it is great to see that the majority of them are female.

E-plant clinics are not without their downsides. “While the overall process is much quicker now, we’ve shifted data entry from the office to the field, which means it takes a bit longer to deal with each farmer and there can be queues,” notes Man Bahadur, “I’m still getting used to typing on a tablet, so it’s a bit slower.” The farmers certainly seem happy to wait their turn, and listen closely as Shusma gets her recommendation – they know that information could be useful for them down the line.
Hari Bahadur Bhandari, the senior plant protection officer for the district, stops by to see how the e-plant clinic is doing. He mentions that as farmers are always short of time, he has had a lot of feedback that they would prefer to get the inputs recommended at the same time. “We’re looking into the feasibility of synchronising our distribution days – when we distribute sprayers, tools, organic fertilizer, plastic sheets and pheromone traps for tuta absoluta – with e-plant clinics, so it becomes more of a one-stop shop for farmers.”
I take my leave of Man Bahadur, Hari and the farmers. On the drive back to Kathmandu, I reflect how much Plantwise has evolved over the years and is obviously continuing to evolve. Although it is still early days, the e-plant clinics are clearly a success here in Nepal – but the programme and the people involved are always learning and thinking of new ways to serve farmers.
This is the first of my two-part series of articles on Plantwise in Nepal. Part 2 will follow later this week. Subscribe to the Plantwise blog now and never miss an update.
Nepal, Plantwise, e-plant clinics, plant clinics
Development communication and extension, Digital development