From Delémont to Dhulikhel: what happens after the MAS ICM

The view from Dhulikhel on the drive to Panchkhal (Photo: CABI)

Driving from Kathmandu to Panchkhal, there are occasional reminders of the traumatic 2015 earthquake. Collapsed buildings which have not yet been rebuilt and major road damage, made worse by each successive monsoon season. Farmers on terraced fields are getting ready for the upcoming paddy season. I am going to meet Debraj Adhikari, an old friend and the plant doctor responsible for plant clinics in Kavrepalanchok district.
I first met Debraj in Switzerland, over a year ago. He was one of the 2016 intake of Masters in Advanced Studies in Integrated Crop Management (MAS ICM) students. On a train to Bern, past Alpine lowlands not too dissimilar from the Himalayan foothills I am now surrounded by, he told me to look him up if I should ever find myself in Nepal. A year later I am able to take him up on his offer.

Panchkhal lies in a valley which is at least five degrees hotter than the surrounding peaks, so I wait for Debraj under the awning of Sharoj Shapkota’s agro-input shop. A notice advertising the e-plant clinic is prominently displayed. Debraj soon pulls up on his motorbike; a cool guy dressed in black biking gear, he looks more ‘easy rider’ than plant doctor. “My office is in Dhulikhel, which is also where I live, but I use the motorbike to organise pop-up plant clinics around the district.” Everything he needs easily fits inside his backpack: the new tablet (of course!), his official Plantwise lab coat and baseball cap, and a plastic toolbox with all the equipment needed for field diagnostics. “The mobile clinics are useful but the regular e-plant clinic in Panchkhal is better attended. The number of farmers is increasing – now that we have tablets, the farmers all want to see what it’s like to get a recommendation by SMS!”

Debraj Adhikari using one of the new tablets (Photo: CABI)

I ask Debraj what it was like coming home from Switzerland. “It was nice to be back, to see my family again. I was in Switzerland for nine months – it’s a long time to be away from home!” Has the course made a difference now that he’s back? “Oh, yes. It was a great opportunity to build my confidence. I really developed my diagnostic skills, which helps me give better information to farmers. And the farmers respect me a little bit more, knowing that I graduated with a degree from Switzerland.”
Before heading over the to the plant clinic around the corner, Debraj leaves a stack of leaflets on tuta absoluta with Sharoj at the agro-input shop. “As extension workers, there’s only so many farmers we can reach, but the Panchkhal Agrovet is open every day and farmers come here all the time with problems.” Since it was first reported in Nepal last year, the tomato pest has become a major problem for Nepalese farmers. Debraj remarks, “I always joke with Sharoj that thanks to tuta, he’ll soon be able to buy a car.”

Things get serious once the plant clinic starts. “Now that I’ve done the MAS ICM, I’m supervising a Bachelor student, who interns at the clinic with me. I’m also still in contact with my supervisors from Delémont. My thesis is going to be published as an article in the national Ministry of Agriculture journal soon and they’re my co-authors.” And what about his fellow students? “We have a WhatsApp group and I was talking to the guys from Uganda just the other day. They were telling me all about fall armyworm in Africa.”
There are already about a dozen farmers at the clinic and more continue to arrive. I observe as Debraj examines the crop samples farmers have brought and enters the data into the tablet. A film crew from NTV is also in attendance, filming as Debraj gives an impromptu lecture on tuta absoluta to the assembled farmers for the daily agriculture show on Nepal’s state television. Debraj is a natural and I suspect he would have had as commanding a presence without the MAS ICM degree, but I cannot help thinking it has further cemented his authority. He has clearly made a name for himself since returning from Switzerland and I am sure he will go far. 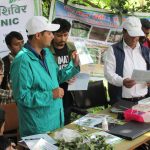 The farmers are keen to learn how to deal with tuta (Photo: CABI) 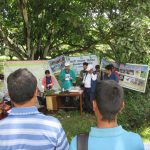 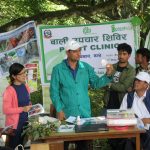 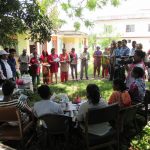 The Nepali state broadcaster is here to film Debraj for a special programme on tuta (Photo: CABI)


This is the second of my two-part series of articles on Plantwise in Nepal. Read Part 1 here.
Subscribe to the Plantwise blog now and never miss an update.
Agriculture and International Development