Youth Changing the Face of Agriculture in Kenya

They are young and sophisticated technophiles operating in the fast lane of life. A typical day for them entails spending considerable amounts of time on the cyberspace. Additionally, they are innovative and have a proclivity for taking greater entrepreneurial risks.  Meet the burgeoning youth population that is revolutionizing the agricultural landscape in Kenya.

After years of playing second fiddle to the older generation, the young farmers are transforming the perception of farming, long entrenched in the nation’s psyche. To most Kenyans, farming was a back-breaking, hardly remunerative, labour-intensive task. However, the young farmers are challenging that notion and causing a paradigm shift to one that regards farming as a profitable venture. As a consequence, many now view agriculture, not as a last resort source of income but as a potentially rewarding enterprise.

Unlike the conventional farmers, the young farmers are not interested in cultivating the traditional crops or rearing the typical domestic animals. Their farming philosophy is simple: grow short cycle crops that have quick returns and focus on intensive agriculture. To these young farmers, farming is trendy, and notwithstanding their impressive academic qualifications, they are very much at home soiling their hands to eke out a living where their less imaginative peers see no opportunities.

To appreciate the significance of the uptake of agriculture by the youth in Kenya, one would need to glance through the Kenya Economic Report 2013. According to the report, creation of jobs for the youth has been identified as a major focus of the country’s development policy. The report states that in Kenya, the youth constitute the bulk of the population. A challenge posed by this, however, is the country’s economy has not created adequate modern jobs for these youths. This is according to a World Bank report that further states that, as a result of the aforementioned, poverty levels are still high and a good number of the youth are being steamrolled into low-paying jobs in the informal sector and subsistence agriculture.

The primacy of agriculture in Kenya’s economy cannot be overstated. The agricultural sector directly accounts for 26 percent of the country’s Gross Domestic Product (GDP) and 27 percent indirectly through associations with manufacturing, distribution and other service-related sectors. In addition, agriculture contributes immensely to rural employment, food production and rural incomes.

In view of the foregoing, it is welcome news, indeed, to see young Kenyans taking charge of their destiny and plunging into the erstwhile miasmic jungle that was agriculture. It is even more heartening to see players, both in the public and private sector join the bandwagon and support the youth in their quest.

Currently, the government of Kenya through one of its state corporations, the Youth Enterprise Development Fund (YEDF) is offering the “Agri-Vijana” loan. The loan targets young people keen on undertaking agribusiness and more precisely, greenhouse farming. The loan package entails supporting young farmers in acquiring greenhouses and global compliant agricultural inputs. This conforms perfectly with the World Bank’s recommendation on poverty eradication. The Bretton Woods’ institution has identified increasing productivity of smallholder farmers through the use of fertilizer, improved seeds and access to markets as a critical pillar in the short and medium-term poverty reduction strategy.

Remember, these young farmers are technophiles. They have smart phones and are active on social media. It is with this realization that organizations such as Mkulima Young, IICD, Hivisasa, Plantwise etc are reaching out to them. The Facebook account for Mkulima Young, for instance, has more than thirty-one thousand followers. IICD is involved in the training of farmers in the use of text and voice messages to receive crop production information and market price information via their mobile phones. Plantwise, on the other hand, is trialling a mobile application christened Plantwise Factsheets Library. This application accords plant doctors, extension workers and farmers free access to a full range of relevant plant health resource materials.

As it has been noted by IICD, in order to ensure the future viability of the agricultural sector, tackle rural poverty and generate employment opportunities in Kenya, it is of paramount importance to furnish these young farmers with the right tools. Besides equipping them, fostering their involvement in agricultural activities and decision-making processes should be prioritised. Efforts towards this end will further be amplified when synergies between Information and Communications Technology (ICT) and capacity development are encouraged. The young farmers have not only shown a knack to innovate but have a strong affinity for using ICT. ICT, therefore, could potentially play a major role in countering youth migration to urban areas by enhancing access to market information, production techniques, new technologies and financing opportunities. 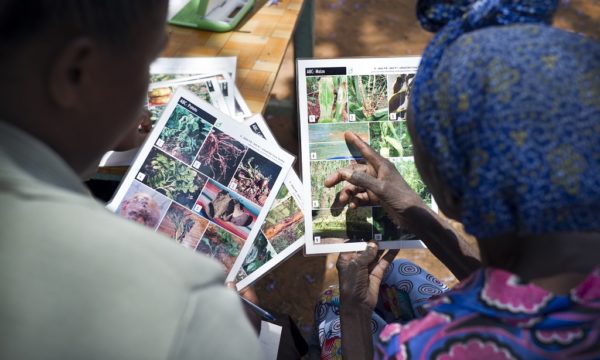