Could Spider Venom Be Used As A Novel Insecticide For Major Crop Pests?

Could spider venom be used as a new novel insecticide? Image ©giovzaid85 via Flickr

A new protein discovered in the venom of Australian tarantulas can also kill insect pests that consume the venom orally. The protein known as orally active insecticidal peptide-1 (OAIP-1) was found to be highly toxic to insects that consumed it, with a similar efficacy to the neonicotinoid insecticide imidacloprid. In particular, the protein was found to be highly toxic to the cotton bollworm, Helicoverpa zea.

Many spider species have evolved insecticidal toxins in their venom, which they inject into the prey through their fangs. Consequently it has often been presumed that the venom would not be toxic when ingested orally by insects pests, and therefore would not be suitable for use as an insecticide. Conversely, the scientists in this study discovered it is possible to isolate spider venom peptides with high levels of oral insecticidal activity. The team used the venom from Selenotypus plumipes which is a large tarantula native to Australia which despite its large size is not harmful to humans.

A protein from the venom named OAIP-1 was found to be as potent as synthetic pyrethroids, and displayed synergy with the neonicotinoid insecticide imidacloprid. OAIP-1 was also found to have a high level of biological stability. As a consequence the authors suggest it may be a good candidate for trait stacking with Bacillus thuringiensis in insect-resistant transgenic crops, and has potential to be sprayed as a foliar insecticide.

Many recently developed chemical insecticides are highly selective for insect pests, as opposed to being broad spectrum. However these insecticides act on a small number of molecular targets, and as a result more than 500 species of arthropods, including many key disease vectors such as mosquitoes, have developed resistant to one or more classes of insecticides. This widespread development of insecticide resistance and the removal of many key insecticides from the market due to concerns about environmental and human safety has resulted in a demand for new environmentally sustainable insecticidal active ingredients with novel modes of action.

There has been increasing interest in insecticidal proteins as bioinsecticides because of their relatively high target specificity and low production costs. In particular, Cry proteins isolated from the bacterium Bacillus thuringiensis have had a huge impact on crop protection in recent years, and have been incorporated into a variety of crops including cotton, corn and potato in order to kill the insect pests eating the plants.  However, the Cry proteins in these transgenic plants have a comparatively narrow host range, being mainly specific to lepidopteran pests and resistance has been reported in some pest species.

The scientists discovered that OAIP-1 is highly toxic to termites, mealworms and in particular the cotton bollworm, where the peptide was found to be more potent than synthetic pyrethroid insecticides. It is thought that the peptide will breakdown into harmless compounds over time in the field.

The oral potency of OAIP-1, its rapid insecticidal action (death within 1-2 days) and its chemical stability may make this peptide a potential insecticide for use against insect pest species. The authors suggest the peptide could be used as a foliar insecticide spray, in transgenic plants as an insect resistance trait or to enhance the efficacy of existing insect pathogens.  It may be that the venom from other insectivorous insects such as centipedes and scorpions may have similar properties that suggest they might be utilised as insecticides. 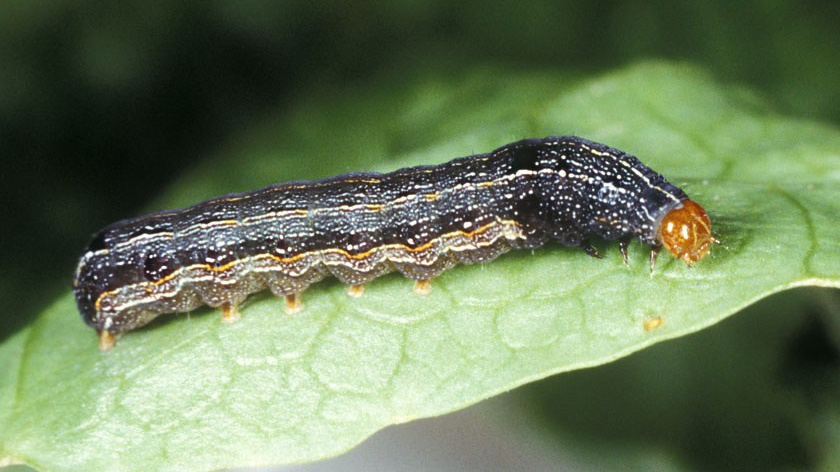