In honour of International Women’s Day, Dr Yelitza Colmenarez, Plantwise Regional Coordinator for Latin America and Caribbean and Country Director of CABI Brazil, reveals the motivation and inspiration behind her career in science communications and says her mother and grandfather’s advice has helped her overcome barriers faced as a professional woman.

What motivated you to work in science and development?

I grew up in a rural agricultural community. Taking as an example my grandfather, who was a farmer, I saw from very early in life how difficult it is sometimes for a farmer to maintain good production and profitability. Through the work of applied science in international development projects, it fills me with satisfaction to be able to contribute to helping farmers bring sustainable agricultural technology to their hands in order to strengthen the agricultural production in Latin America and the Caribbean. Thanks to the hard work of the producers we have food at our table and it is a great pleasure to be able to contribute to their benefit.
Which female scientist inspires you and why?
In fact, there are two of them: The particle physicist Mayla Sanchez and the NASA astronaut Dr Ellen Ochoa, as both were able to overcome barriers and make significant accomplishments as a female scientist.

What has been your biggest scientific achievement?
I look forward to contributing to applied science in agriculture. I am very proud to have received the award of ‘Scientist of the Year’ in 2008 given by the Ministry of Agriculture in Barbados. I am also grateful for the appreciation I have received from farmer’s communities once they are obtaining good results controlling the key pest and problems affecting their crops.
What barriers have you faced as a woman scientist in your work and how have you overcome them?
From the time I decided to be an agricultural engineer I was always told that was not a career for a woman, especially in Venezuela; as the country at that time had oil production as the main activity. In fact, in the agricultural school there were few girls around that time. When I got my first job I remember some of the farmers saying: “Are you the daughter of the Doctor who is coming to help us in agriculture?” They said they were expecting a mature man as the person responsible of the agricultural activities and not a young-Latin woman coming to establish the Integrated Pest Management programme. It was a big pleasure for me working with all of them, as thanks to their strong support, the programme was a successful one. The front door of my laboratory was always full of bags of potatoes, tomatoes and many other crops as a way of them saying “Thank you”. Farmers test you at the field but once you gain their trust they always show you a genuine appreciation. I have always kept my mother and grandfather advice: “Work hard and always try to give your best. No matter what people say, always give your best”. This helped me to overcome the major barriers I have faced as a professional woman.
What does the future hold for you and other women working in science and development?
I hope the world continues recognizing the efforts of women in science and in other areas, and that we can really have a more inclusive world.
What advice would you give to girls and women thinking of pursuing a career in science?
“Work hard and always try to give your best. No matter what people say, always give your best”.
Additional information
In addition to her role as the Plantwise Regional Coordinator for Latin America and Caribbean and Country Director of CABI Brazil, Dr Colmenarez is part of a team working to manage invasive Madagascar rubbervine in Brazil.
Find out more about Dr Colmenarez and her projects.

The Plantwise Knowledge Bank (PWKB) is a free online resource that gathers plant health information from across the world. Over 15,000 pieces of content, which include, pest management decision guide’s (PMDG), factsheets for farmers (PFF… 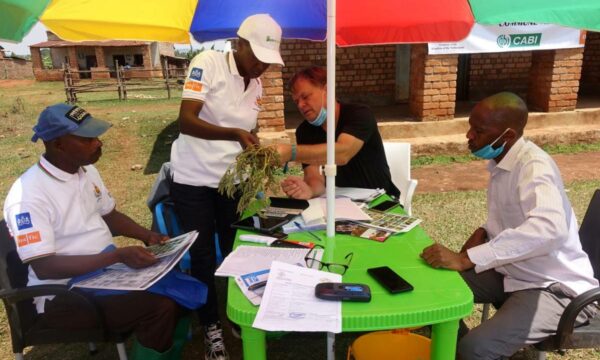