Crop diseases are an ever-increasing worldwide threat and estimated to be the cause of the 20-40% decrease in global agricultural productivity. With this boom in plant diseases affecting agricultural practices, there is therefore also an increased demand for research and the implementation of disease control and management schemes.
Ghana is the second largest producer of cocoa (Theobroma cacao L.) globally, with approximately 800 000 families being dependant on the revenue from farming this crop. Due to this, the threat of plant diseases negatively impacting on cocoa crop production has increased over recent decades. One such disease is Cocoa swollen shoot virus disease (CSSVD) which is severely impacting on cocoa productivity across Western Africa, particularly within rural areas of Ghana.
CSSVD was first detected in Ghana in 1936, the disease is caused by varieties of Cocoa swollen shoot virus (CSSV) which can infect cocoa crops at any developmental stage. Infection results in a number of symptoms depending on crop stage, with general symptoms being defoliation, stem and root swelling, plant dieback and dramatic yield loss (abnormal pod development).
The only current treatment method which is known to be effective at tackling this disease is to fell infected trees. A national eradication scheme via felling was launched in 1946, which is still considered to be the most expensive campaign in the world. The number of cocoa trees infected with CSSVD is estimated to be at over 300 million, which has cut down on regular incomes for farmers with entire crop fields being lost in some cases.

Research into preventative control measures for CSSDV has been limited over the last 80 years, with farmers inconsistently implementing any procedures which have shown positive results (vector control and resistance breeding). As such, ecological-based methods have been of increasing support due to the reduction in primary control actions needing to be taken.
One such method is agroforestry, a natural resource management approach which is designed to promote diversification of shade producing trees within agricultural landscapes. If managed successfully, such systems can have beneficial effects on the health and development of cocoa trees, which in turn will improve resistance to diseases such as CSSVD. As well as improving the long-term sustainability of cocoa farms, it has been noted that agroforestry methods have been found to improve profitability compared to standard full-sun farming systems.
Studies have found that shade-producing trees can decrease pest species populations as well as favouring natural pest predators. In the case of CSSVD, the mealybug vectors (Pseudococcus njalensis and Pseudococcus citri) were found to be more abundant within full-sun conditions compared to shaded test areas. Predators and parasitoids of the mealybugs were also found in larger abundances in shaded zones.

An example of agroforestry practices in a banana plantation, Uganda (© Dan Frendin)

Further information on the benefits and limitations of integrating agroforestry tools within cocoa farming can be found in the original article available here: 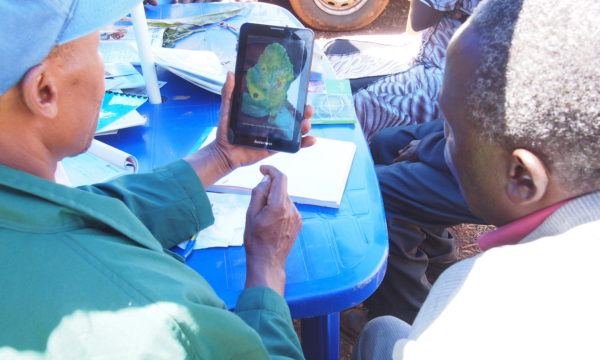