A team of researchers from the University of Illinois have developed a completely automated robot capable of monitoring crops in the field during growth periods with the aim of aiding crop breeders in the extensive task of developing and comparing plant cultivars.
Crop breeders undertake large experiments comparing thousands of plant cultivars and varieties across hundreds of acres to measure key traits such as plant emergence and height. The majority of this is done by hand, and is an extremely expensive and time consuming process which can sometimes be inaccurate and even inadequate due to human constraints.
“There’s a real need to accelerate breeding to meet global food demands,” said Girish Chowdhary, an assistant professor of field robotics in the Department of Agriculture and Biological Engineering and the Coordinated Lab at Illinois University. “In Africa, the populations will be more than double by 2050, but today the yields are only a quarter of their potential.”
The 13 inch wide, 24 pound robot called TerraSentia is transportable and autonomous. It is able to move freely between crop rows and capture plant informatics using a range of sensors, algorithms and deep learning. TerraSentia has been ‘taught’ the ability to count corn plants by using just 300 images, a notable feature which was pointed out during the Robotics: Science and System conference earlier this year, with the project being awarded the Best Systems Paper award.
“One challenge is that plants aren’t equally spaced, so just assuming that a single plant is in the camera frame is not good enough,” said researcher ZhongZhong Zhang. “We developed a method that uses the camera frame to adjust to varying inter-plant spacing, which has led to a fairly robust system for counting plants in different fields, with different and varying spacing, and at different speeds.” 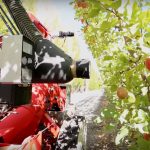 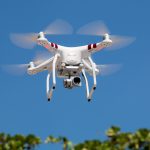 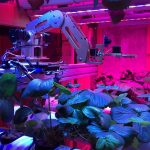 Robotics in agriculture are being explored across numerous areas, for example with the Abundant Robotics crop picking machines, Tortuga AgTech environmentally controlled areas (EIA) and drones (© Pexels and Machine Design)

Many robotics projects tailored towards agricultural practices have been demonstrated over recent years, but many haven’t been able to transition into commercial use. Farming practices such as crop picking requires both the ability to detect crops in the field accurately and the maneuverability to pick crops without damaging both the target area and the plant itself. In terms of monitoring harvests and plant health, this is an easier task to achieve, with the main limiting factor being the lack of uniform environments at ground level for small robots to travel across which can be solved using a range of sensors and ‘machine vision’.
The work undertaken to develop the TerraSentia project was supported by the Advanced Research Project Agency – Energy (ARPA-E) as part of the TERRA-MEPP at the Carl R. Woese Institute for Genomic Biology. The newly developed robotic aid is commercially available through the start-up company EarthSense Inc. which is further equipping the robot with advanced autonomy and plant analytic capabilities.
To read more information on TerraSentia and other agriculture robotics projects, please see the links below:

Bacterial wilt in tomato crops were the focus of this study (© Pexels) Bacterial wilt (Ralstonia solanacearum) is one of the world’s most devastating plant diseases, with major crops such as tomato, potato and pepper being severely affected. Until now,…

How Mobile Technology is Transforming Livestock Farming In Kenya