The unfortunate plight of the pollinators- Who are the culprits?

Honey bee foraging on the flower

Why are pollinators declining? New research suggests neonicotinoids are to blame.

When we talk of the crop production we hardly remember to acknowledge the services of these tiny pollinators and also don’t bother to safeguard them when we invest a lot in plant protection. These pollinators play an elemental role in an important process of nature known as pollination. Pollination is an important process in both human managed and natural terrestrial ecosystems. According to the Food and Agriculture Organisation of the United Nations pollination is one of the essential ecosystem services.

Approximately 80 per cent of all flowering plant species are pollinated by animals, including vertebrates and mammals -but the main pollinators reported are insects. Among insects also, the honey bees are reported to be the major pollinators mostly in the human managed ecosystems.

The pollinators such as bees, birds and bats affect 35 percent of the world’s crop production, increasing outputs of 87 of the leading food crops worldwide, as well as many plant-derived medicines.

About one out of every three mouthfuls of food we eat and the beverages we drink is delivered to us by pollinators. If the bees continue to perish we can lose almost 94 crops including agricultural and horticultural crops grown worldwide.

During the last four decades the consumption of pesticides has increased several folds and so their side effects. The US Environmental Protection Agency (EPA) acknowledges that “pesticide poisoning” may be one of the factors leading to colony collapse disorder in honey bees these days. Reports confirm that pesticides damage the ability of bees to gather food and can also kill them. According to a new research, two pesticides commonly used by British farmers could affect bee’s brains. The two pesticides namely, neonicotinoids and coumaphos target bees’ brains, thus making it a slow learner and make it forget floral scents.

The neonicotinoids are a relatively new class of pesticides that have an effect on the bee’s central nervous system. Available neonicotinoid insecticides include: Acetamiprid,    Clothianidin,  Imidacloprid,  Nitenpyram, Nithiazine, Thiacloprid and Thiamethoxam. They represent almost 40 per cent of the insecticide market, and global sales tallied more than $2.79 billion in 2011.

New scientific studies indicate that, bees that feed on neonicotinoid contaminated pollen and nectar, forage less and produces fewer offspring. It was also found that, the combination effect of these two pesticides, are far greater than individual effect.  Bees that were exposed to combined insecticides were slow to learn or sometimes completely forgot important associations between their ability to nectar and floral scent.
It is the most widely used insecticide in US, which is used as a coating in agricultural seeds and in pot plants. It spreads to the whole plant including pollen and nectar that the bees eat. The other insecticide, Coumaphos is a compound that is used in honey bee hive to kill a parasite called, Varroa mite that commonly attacks honey bees.

A study that focused on the Thiamethoxam, a neonicotinoid pesticide, which is metabolized by bees into clothianidin, a pesticide cited in legal action, tested the hypothesis that a sub-lethal exposure to a neonicotinoid indirectly increases hive death rate through homing failure in foraging honey bees. When exposed to sub-lethal doses of thiamethoxam, at levels present in the environment, honey bees were less likely to return to the hive after foraging than control bees that were tracked with RFID, but not intentionally dosed with pesticides. The survival rate is even lower when exposed bees are placed in foraging areas with which they are less familiar.

Mode of Action of Neonicotinoids

Neonicotinoids act on the central nervous system of insects similar to nicotine with lower toxicity to mammals. As they are systemic in nature they are taken up by a plant’s vascular system and expressed through pollen, nectar and guttation droplets from which bees forage and drink. They bind at the specific site, the postsynaptic nicotinic acetylcholine receptor. Under the WHO/ EPA classification these compounds are placed under class II or class III on the basis of their toxicity.

The poisoning of pollinator occurs when-

Avoiding pesticide risks to the pollinators

In an unprecedented study, honey bees have been found to be the world’s most important single species pollinator in natural ecosystems. Working alongside wild bees, they are also said to be responsible for every one in three bites of food. For the smal… 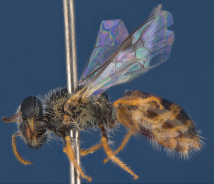