Global market prices have weakened as supply exceeds demand for most farmers involved in tea production. The situation; which has devastated the hopes of farmers for lucrative returns was actually enhanced by favourable climatic conditions that brought about increased yields in most tea producing regions.
African tea farmers have produced too much tea! In Kenya, tea production for the month of May 2018 was 43.35 Million Kgs, versus 38.82 Million Kgs recorded during the corresponding month of 2017. The 12% increase in production was largely attributed to the continued heavy rainfall in tea growing areas in the West of Rift. Therefore, the output within the region rose from 22.64 Million Kgs to 28.03 Million Kgs.
From time immemorial, Kenya has been known as the leading tea producer in Africa and fourth in the world after India, China and Sri Lanka. Kenya’s large production on about 110,000 hectares of land is made possible by suitable soil, access to labour, favourable climate and a functioning processing industry all of which makes tea the country’s highest agricultural foreign exchange earner.
The major tea growing areas in Kenya include the western highlands such as Kericho, Nandi, Kakamega, Cherangani Hills and the eastern highlands which cover Kiambu, Thika, Maragua, Nyeri, Murang’s and Nyambene.
Apart from the sudden increase in yields of tea that led to the fall in global prices, Kenya tea farmers often encounter problems such as poor roads, delayed payment, pests and disease, foreign exchange rates, among many others, which all contribute in some way to decreasing potential profits. 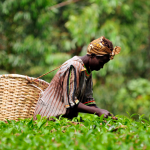 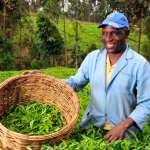 
The recent increase in production cut across all levels, with both the smallholders and plantations recording increased outputs. Plantations seeing a much higher increase of 18% against just 7% by smallholders.
According to the report gathered from the Tea Directorate, cumulative production for the period of January to May 2018 rose to 187.69million Kgs against 160.37million Kgs of the corresponding period in 2017. This supply increase qualifies the price fall in most tea export destination countries such as Pakistan, the UK, Egypt, UAE, USA, Jordan, Sudan, Russia, Nigeria, Poland and many more.
This has resulted in the fall of the average price for the first five months of 2018 at $2.80 when compared to $2.97 for the corresponding period in 2017. At the same time, a fall in the auction price of tea in 2018 when compared to the corresponding period of 2017 was also recorded.
This supply influx dwindled the tea global market prices and placed farmers at the mercies of flat returns.
Further reading:

Sunmbo Olorunfemi is a graduate of Sustainable Agriculture and Food Security and currently working as an intern with the Plantwise Knowledge Bank.