By Philippa Merry. Reblogged from The Courier. 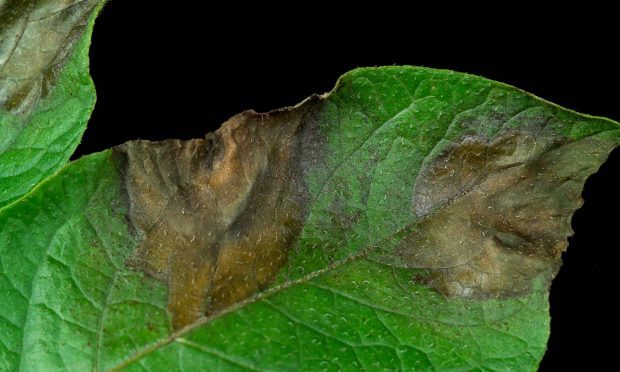 Dubbed an E-Nose, the equipment has been developed by engineers and scientists to detect crop pathogens by smell weeks before any infection becomes outwardly apparent or evident on any visual basis.
“It’s an amazing tool for early detection,” commented Kit Franklin, a lecturer of agricultural engineering at Harper Adams University.
Mr Franklin revealed the technological advance during a discussion on the latest sensors, robotics and automation at the SRUC and AHDB’s joint Agronomy 2017 (Scotland) forum, staged at Perth Racecourse this week.
He said E-Noses will potentially be able to give arable farmers as much as a two-week head start when it comes to controlling a wide variety of plant diseases – from fungi to oomycetes, bacteria, viruses and nematodes.
“The equipment can effectively smell disease long before any human is able to see it coming,” commented Mr Franklin.
Early trials, he added, have proved the technology capable of detecting particularly destructive fungus-like organisms such as potato blight, which is one of the most devastating crop diseases in agriculture.
Blight currently leaves UK growers around £20million out of pocket each year in fungicides costs to keep it in check.
“For farmers, early detection absolutely allows for early action and in the arable industry every day gained can have a hugely positive knock-on effect,” Mr Franklin said.
“In theory, they will allow farmers to nip crop diseases in the bud before they get the chance to progress beyond the earliest stages of development.”
The electronic sensing systems have been around for several years but have typically been large and expensive.
Recent research has been focused on making the devices smaller, less expensive and more sensitive.
They originally evolved for use in quality control applications in the food, beverage and cosmetics industries, although they are now also used for medical diagnosis, as well as for the detection of pollutants and gas leaks for environmental protection.
Models adapted by engineers for use in the farming industry now look not dissimilar to hand-held walkie talkies.
Mr Franklin said scientists are in the process of programming agri E-Noses to capture the odours associated with each specific arable crop disease, after which they will be made available for commercial use.
As they have to be ‘tuned’ to specific chemicals, they will only be able to detect one disease at a time.
This article was originally published in The Courier. Read the original article→