CABI exhibited its Plantwise plant clinic activities in Afghanistan at the Kabul International AgFair, held at Badam Bagh Kabul on 19-21 October. On display were materials regularly used at plant clinics throughout Afghanistan, including photo sheets, factsheets, PMDGs, and prescription forms. CABI representatives also demonstrated tool kits used in the nationwide Insect Pest and Plant Diseases (IPPD) Survey, which is being led by CABI. To underline our close partnership with our implementing partners in Afghanistan, the booth was directly next to the Ministry of Agriculture’s Plant Protection and Quarantine Department (PPQD) booth. 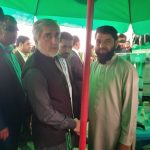 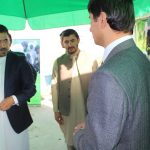 
The fair was opened by the president of the Islamic Republic of Afghanistan, His Excellency Mohammad Ashraf Ghani. On the final day of the fair, CABI was honoured to have both the Chief Executive of the Islamic Republic of Afghanistan, Dr Abdullah Abdullah, and the Minister of Agriculture, Assadullah Zameer, visit the booth, along with provincial directors from the Directorate of Agriculture, Irrigation and Livestock (DAIL) from Paktia and Helmand Provinces. The officials and the general public were impressed with the support CABI is providing to farmers in Afghanistan in general, in particular via the Plantwise programme.
Afghanistan, Plantwise
Agriculture and International Development, Crop health, Development communication and extension

Farmers in India use biointensive methods to manage fall armyworm